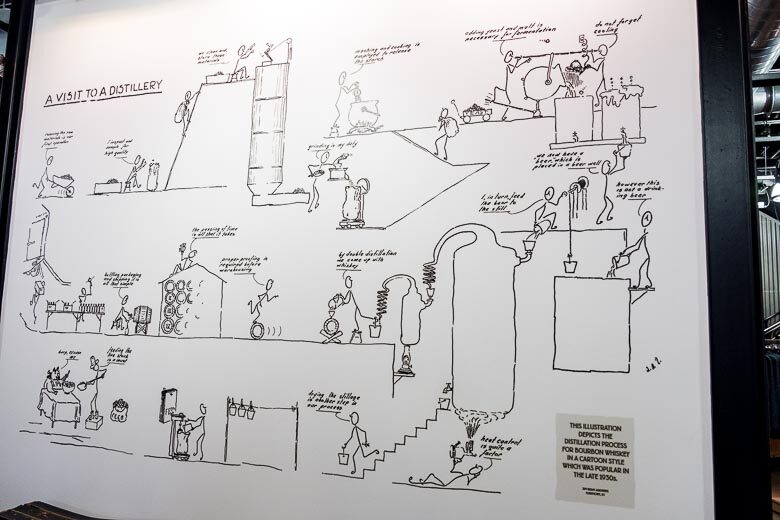 Here is the general process for making Bourbon, like all “secret family recopies” it is the variations to this basic recipe that distinguishes one Bourbon from another. The main steps are the same, but a slight alteration can go a very long way in creating a distinctive tasting Bourbon.

Milling:
Grain is milled or ground to maximize its surface area, and expose the most starches, much like what happens when we chew our food. Water is added and both are then deposited into a cooker.

Cooking:
The milled grains are cooked to soften and liquefy the gain to maximize the starches that can be converted into sugar. After cooking long enough enzymes are then added, generally in the form of Malted barley.

Fermenting:
After cooking the resulting “mash” is then pumped into a fermentor, where yeast is added and in about three to seven days the enzymes will have converted the sugar into alcohol and CO2. The resulting liquid in the fermentor is called distiller’s beer and is not pumped into the distiller.

Distilling:
Most of the alcohol created in the fermentor have a lower boiling point than water. The purpose of the distilling process is to separate out those alcohols into the desired ones. Based on the temperature and the timeline, as the vapors are condescend back into a liquid they are either kept or discarded. The retained “spirits” are collected into a collection tank and sent to the barrel room.

Barreling:
The newly distilled spirits are now added to a new charred oak barrel at less than 125 Proof. The desired “entry” proof is achieved by adding only water.

Bottling:
After “aging” in the barrel the contents can now be called Bourbon and can be bottled. At this point only water can be added to make the desired “bottle” proof.

What’s On The Label & What Does It All Mean?