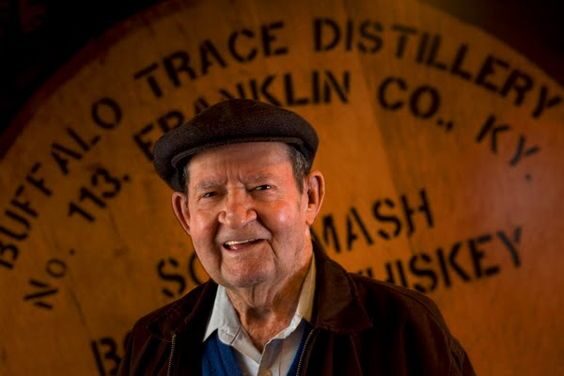 “Son, we’re not hiring any hands today” were the words that greeted Elmer T. Lee when he first showed up to interview at George T. Stagg Distillery in 1949. They happened to be uttered by Col. Albert B. Blanton, the iconic President of the Distillery at the time. Had it not been for Orville Schupp’s insistence that he come in to work the following week anyway, Elmer might not have gone on to be named the Distillery’s first Master Distiller.

Kentucky born and bred, Elmer joined the Distillery as a maintenance engineer in 1949 after serving as a Radar Bombardier in World War II and returning to earn an engineering degree at the University of Kentucky.  Quickly rising to Plant Engineer, then Plant Superintendent and eventually the shared title of Plant Manager and Master Distiller, Elmer oversaw much of the Distillery’s modernization and growth up until his retirement in 1985.

In 1984, Elmer honored the man who was initially so skeptical of him by introducing the world’s first single-barrel bourbon, Blanton’s Single Barrel. Not long thereafter, Elmer himself was honored with his own single-barrel namesake. Both bourbons have been the recipient of the highest worldwide acclaim and honors .

Elmer continued to serve as an ambassador and Master Distiller Emeritus for Buffalo Trace, educating the world on the heritage and unique qualities of Kentucky’s bourbon whiskey. His work and legacy have been honored by his induction into the Kentucky Bourbon Hall of Fame in 2001, his receipt of the “Lifetime Achievement Award” from both Whisky Advocate in 2002 and Whisky Magazine in 2012, and his induction into Whisky Magazine’s Hall of Fame. Elmer passed away in 2013 just a few weeks shy of what would have been his 94th birthday, but his contributions to the bourbon industry live on through the millions of fans worldwide who enjoy his creations.