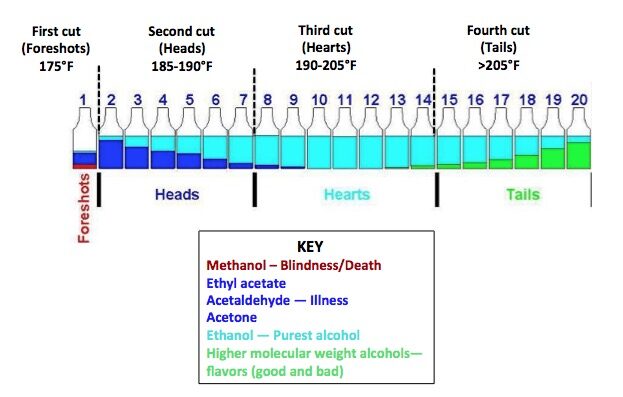 During the grain fermentation process, many compounds are created, some good and some bad, and some of these “bad” compounds are not only harmful but even poisonous. It is the Distillers job to remove the bad compounds and keep the good ones. They call this process simply “Making the Cuts.”

The tool that the Distiller uses to make these cuts is called “distillation.” Technically they use temperature to do all the heavy lifting, as each compound has a different boiling point. The “heads” (the bad stuff) evaporate first followed by the “hearts” (the tasty part) and then finally the “tails” (the mostly bad flavors) are boiled off.

Heads
All the compounds in this group are toxic, one of which is methanol and if drunk can make you blind due to direct toxicity of formic acid on the retina and can even kill you in high concentrations.

Hearts
This section of the distillation process is also called “low wine” contains most of the aromatics–fruits, florals, and some sweet spices, created in fermentation thanks to the yeast that the distiller selects to use.

Tails
These are also referred to as “fusel oils” and are the last compounds to evaporate during distillation. Most of the compounds are undesirable for use in the finished product, however some are at the discretion of the distiller. The selected portion of the tails that the distiller wants to use are collected then condensed back into the low wine then redistilled into the “high wine” using the second still called a “doubler.”