Invert Syrup – What Is It?? 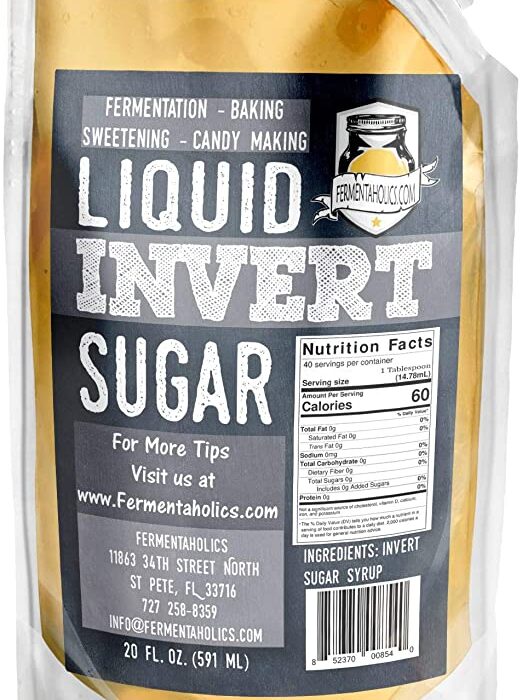 Invert syrups are commonly used to sweeten liqueurs and cordials. It is an edible mixture of two simple sugars—glucose and fructose—that is made by heating sucrose with water. It is thought to be sweeter than table sugar, and foods that contain it retain moisture better and crystallize less easily

Definition
Invert syrup is a sugar syrup composed of equal parts glucose (C6H12O6) and fructose (C6H12O6), derived from splitting a solution of sucrose (C12H22O11) in water (H2O) into these component parts.

Name Derivation
The concentration of a sugar syrup can be measured by passing polarized light (light whose waves are all aligned in a single plane which can be measured before and after it enters the syrup) through the solution and measuring the degree of light wave rotation upon exiting.  A solution of pure sucrose will rotate the light 66.5 degrees to the right, and as the sucrose is converted into glucose and fructose the exiting light will begin rotating to the left.  A fully converted sugar will have an exit rotation of 39 degrees to the left.  This inversion of the rotation from right to left gives the converted syrup its name.

Process
Sucrose is a disaccharide, which indicates that it is composed of two simpler monosaccharides (glucose and fructose).  By heating a solution of sucrose in water, a hydrolysis reaction is induced which splits the disaccharide into its two component parts.  By adding an acid catalyst such as lemon juice (10ml per kg sugar) or cream of tartar (1g per kg sugar), the reaction can be accelerated.  Pastry chefs often make invert syrup by cooking sucrose syrup with an acid until a thicker syrup is formed (e.g., boiling a sucrose/acid solution for 20 minutes at 237°F).  Invert syrup can be made in varying thicknesses based on the ratio of sugar to water, and can be converted to varying degrees (up to about 85% glucose/fructose) based on the reaction time.

In the inversion process, a solution of sugar is heated in the presence of an acid until it reaches 236° F (114° C). Clear invert syrup starts with white sugar and is heated very slowly to minimize Maillard reactions that would otherwise develop color and flavor in the syrup. Once inverted, this pale, corn syrup­–like sugar can be refrigerated and stored for months.

Use a relatively unprocessed cane sugar for maximum flavor. Raw cane sugar—with variations such as turbinado, demerara, and evaporated cane crystals—all work well, each contributing a slightly different character to the final product. Plain white sugar, be it cane, beet, or otherwise, tends to disappear into beer, bolstering alcohol, drying the finish, and lightening the palate. That’s just the thing with styles like Belgian golden strong ale and West Coast IPA, where caramel, dark rum, and raisin characteristics are unwanted. The clear stuff is probably also the confectioner’s and baker’s choice. We’ll start there, then focus on the dark side.

Begin with a heavy, deep saucepan. Add 2 cups (473 mL) carbon-filtered water, 2.2 lb. (1 kg) white cane sugar, and 1/4 teaspoon (1.23 mL, usually about 1 g) of food-grade acid. The acid can be potassium bitartrate (cream of tartar), citric acid, or even ascorbic acid if you have some vitamin C handy. If you prefer a liquid preparation of 88% lactic acid, use 3 mL (just over half a teaspoon). Brave souls and purists can stop there, but I strongly recommend adding about 4 tablespoons of corn syrup or Lyle’s Golden Syrup as added protection against crystallization.

After mixing it with water, the sugar will be wet and slushy. Add low to medium heat to begin dissolving. Slow, gentle, even application of heat is the best way to avoid the biggest issue with syrup-making: crystallization. You want to go slowly enough to make sure all crystals disappear into solution before the syrup boils. Chefs often say to use a wet pastry brush to wet down any sugar crust that forms at the side of the syrup; I’ve found a spray bottle or mister does a good job here as well. Just know that the more water you introduce at this point, the longer it will take to get to the correct temperature.